We have 177 guests online 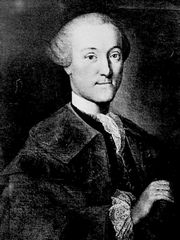 Anatomist and botanist, Johann Gottfried Zinn was born on December 6, 1727 in the city of Ansbach, Germany. He started his medical studies in his native city, becoming later a student of Dr.  Albrecht von Hallers at the University of Göttingen, and received his MD in 1749.

He left for Berlin to continue his studies but came back shortly thereafter. He became a professor of anatomy at the University of Göttingen and in 1753 he also became the director of the botanical garden in the same city.

He is known for his anatomical treatise on the anatomy of the human eye: “Descriptio anatomica oculi humani iconibus illustrata”. Because of this, his name has become an eponym in the “Zonule of Zinn”, a ring of strands that forms a fibrous band connecting the ciliary body with the capsule of the lens of the eye. Zonule of Zinn is sometimes referred to as the suspensory ligaments of the lens, or the “ligament of Zinn”. His name is also attached to the anular ring tendon found in the posterior aspect of the eye, the "anular tendon of Zinn". This ring serves as attachment for all the extraocular muscles of the eye and the optic nerve passes through the center of the ring.

Carol Linné (Carolus Linneaus) named a genus of flowers in the family Asteraceae known vernacularly today as “Zinnia” in his honor. Hover your cursor over his portrait to see the flower.

The chapter on orbital anatomy of his anatomy book, taken from the second edition in 1780, has been translated and the first of three parts is published in an issue of “Strabismus”

His life was short, dying at the early age of 32, but his name lives on in the name of a beautiful flower.

The presence of Andreas Vesalius in Zakynthos (1)